The Crazy-Good Kids are the current Pop Tarts mascot. They commonly frighten the Pop-Tarts and cause them to be eaten or chased away. They are also colored in black and white.

In 2004, Pop Tarts began a new ad campaign titled "Crazy Good". Characters that appeared often were a singing lizard and a group of kids, dubbed "Crazy-Good Kids", who commonly frightened the Pop Tarts and caused them to be eaten or chased away. The ads employ squiggly animation, surreal humor, and non sequitur, all of which bear a strong resemblance to the signature work of animator Don Hertzfeldt. One "Crazy-Good Kid" in particular bears strong resemblance to Billy in Hertzfeldt's Billy's Balloon. However, Hertzfeldt was not involved in any way with the ads and in 2006 was considering possible litigation for stealing his work. Many of these commercials had fun online games for the viewers to play at pop-tarts.com. In 2006, the company was well known after the release of, "the great fruit escape". In 2008, it happened again with their, "hide & seek" campaign. In 2016, "pop the vote" was the new fad. Kids could vote for their favorite pop tart.

between 2004-current, the crazy good kids have starred in these following commercials: 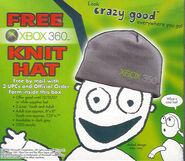 Crazy-Good Xbox 360 Hat
Add a photo to this gallery
Retrieved from "https://poptarts.fandom.com/wiki/Crazy-Good_Kids?oldid=11650"
Community content is available under CC-BY-SA unless otherwise noted.